The purpose of any crime scene investigation is to help establish what happened (crime scene reconstruction) and to identify the suspect(s) and here are some very effective crime scene response guidelines that will assist any investigator in a successful crime scene investigation. This is done by carefully documenting the conditions at a crime scene and recognizing all relevant physical and DNA evidence. The ability to recognize and properly collect physical evidence is oftentimes critical to both solving and prosecuting violent crimes. It is no exaggeration to say that in most cases, the law enforcement officer who protects and searches a crime scene plays a critical role in determining whether physical evidence will be used in solving or prosecuting violent crimes.

Effective Crime Scene Investigation Diagrams
Creating accurate and effective crime scene investigation diagrams will help investigators recall details of the crime scene when preparing for the courts or case you may be working on.

CAD Pro’s drafting and design software provides the necessary design tools and features that anyone can use for accurate and effective crime scene investigation diagrams. Accurately portray the physical facts, relate the sequence of events, establish precise location and relationship of objects and evidence while creating a permanent record of the crime scene. 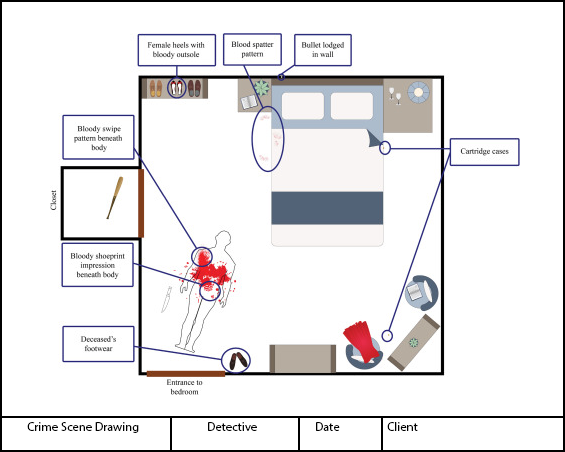 Despite what TV and movies portray, crime scene investigation is a difficult and time-consuming job. There is no substitute for a careful and thoughtful approach and following these effective crime scene response guidelines.

An investigator must not leap to an immediate conclusion as to what happened based upon limited information but must generate several different theories of the crime, keeping the ones that are not eliminated by incoming information at the scene. Reasonable inferences about what happened are produced from the scene appearance and information from witnesses. These theories will help guide the investigator to document specific conditions and recognize valuable evidence.

Documenting crime scene conditions can include immediately recording transient details such as lighting (on/off), drapes (open/closed), weather, or furniture moved by medical teams. Certain evidence such as shoeprints or gunshot residue is fragile and if not collected immediately can easily be destroyed or lost. The scope of the investigation also extends to considerations of arguments which might be generated in this case (suicide/self-defense) and documenting conditions which would support or refute these arguments. These are important conditions when setting any type of effective crime scene response guidelines

In addition to these effective crime scene response guidelines, it is important to be able to recognize what should be present at a scene but is not (victim’s vehicle/wallet/keys) and objects which appear to be out of place (ski mask) and might have been left by the assailant. It is also important to determine the full extent of a crime scene. A crime scene is not merely the immediate area where a body is located or where an assailant concentrated his activities but can also encompass a vehicle and access/escape routes.

Although there are common items which are frequently collected as evidence (fingerprints, DNA samples, shoeprints, or bloodstains), literally any object can be physical evidence. Anything which can be used to connect a victim to a suspect or a suspect to a victim or crime scene is relevant physical evidence. Using these effective crime scene response guidelines “shopping list” approach (collecting all bloodstains, hairs, or shoeprints) will probably not result in recognizing the best evidence. For example, collecting bloodstains under a victim’s body or shoeprints from emergency personnel will rarely answer important questions. Conversely, a single matchstick (not usually mentioned as physical evidence) recovered on the floor near a victim’s body can be excellent physical evidence since it can be directly tied to a matchbook found in a suspect’s pocket.

Since a weapon or burglar tool is easily recognized as significant physical evidence, it is frequently destroyed by the perpetrator. Sometimes the only remaining evidence is microscopic evidence consisting of hairs, fibers, or other small traces the assailant unknowingly leaves behind or takes with him. Although this evidence is effectively collected when the clothing of the victim or suspect is taken, protocols (involving tape lifts) should be in place to process nude bodies so as not to lose this fragile evidence.

Organization and Procedures for Search Operations