Great ways for optimizing net zero homes that will help the environment. These Habitat for Humanity net zero homes in Colorado are helping to find solutions for the local utility’s power management problem. 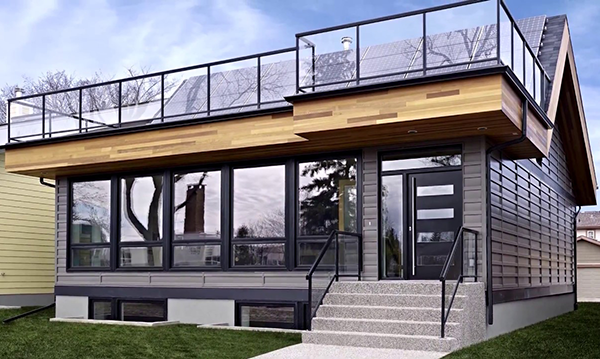 Affordable to own, and affordable to operate: That’s the idea for the 27-unit Basalt Vista housing development under construction by Habitat for Humanity of the Roaring Fork Valley in Basalt, Colo., this year. Volunteer labor, generous donations of materials, and Habitat’s financing will help in optimizing net zero homes while keeping the cost of ownership down. Solar panels on the roof, paid for by a grant from local nonprofit Community Office for Resource Efficiency, will help the all-electric homes achieve zero net energy performance, offsetting the power consumption of the homes’ heat-pump heating and cooling systems and keeping utility bills low.

Project architects Erica and Brian Golden of 2757 Design Build in Carbondale, Colo., have been involved in the project since the start, beginning with site development planning. They designed the duplex and triplex buildings before net zero became part of the concept. Nevertheless, the site plan and house designs combined for easy adaptation to a PV-based energy package. Says Brian Golden, “The design was somewhat based on a simplicity of form and structure, but also giving this kind of simple split gable approach—simple shallow roof pitches that were volunteer-friendly.” The designers had been careful not to have the units shade one another. “The roofscape was already very well situated to get a lot of the optimization of the PV that we were looking for,” says Brian Golden.

By the same token, optimizing net zero homes didn’t aim to surpass the local energy code (based on the 2015 IECC). “These were not heroic buildings,” says Marty Treadway, program director at CORE. “They’re a simple design, they are code-compliant, and then there’s maybe a few tweaks that we’ve made, in this case, hybrid electric water heaters, heat recovery ventilators, and mini-splits for space heating.” All of the units have sealed conditioned crawlspaces, according to Erica Golden. Walls are basic 2×6 construction with R-23 blown-in fiberglass insulation, plus an inch of rigid insulation on the exterior. Truss roofs are insulated to R-49 with blown fiberglass.

“For these affordable projects we’ve tried to push increasing insulation a little bit here and there,” says Erica Golden, “and it didn’t really swing the scale on the amount of PV that we needed to get to net zero, or the energy consumption. So, we were starting to get to those diminishing returns for optimizing net zero homes”

Four of the planned 27 units are finished and occupied. And in those four, the project team is taking things a step further. Holy Cross Energy, the local electric utility co-op, is using the four units as a research project and test case for a comprehensive new approach to energy management. Each of the units has a storage battery that can capture the power generated by the rooftop solar panels. They’ve also got a sophisticated communication and control device called a “coordinator” that interfaces between the house and the utility’s dispatch center. Partnering with the National Renewable Energy Laboratory, Holy Cross is working on a concept that the utility hopes will help it reach its ambitious goal of 70% carbon-free energy by the year 2030.

The batteries can serve multiple aims. They can store power from the solar panels; they can supply power to the house; they can store power drawn from the grid; and they can supply power to the grid. All those functions are managed by the coordinator, which is also able to control other “distributed energy resources” in the house—the heat pumps, the heat pump water heater, and the electric vehicle charger—explains Chris Bilby, a research and programs engineer with Holy Cross. The idea is to harmonize the requirements of the house with the grid’s needed for optimal power flow and optimizing net zero homes.

Photovoltaics are a plentiful resource, but they come with drawbacks for the utility. According to Bilby, “net zero is really pretty easy to get to—we just put as much generation on our roof as we consume. And if those two match at the end of the year, we give each other high-fives: We were at net zero. That works great, except you’re using the grid as a battery. You generate during the day when you’re not home, the surplus feeds into the grid, and then when you come home at night, you pull from the grid. And that has dramatic impacts on the grid. PV produces most of the time when we don’t need the energy. And it doesn’t produce at nighttime at 9 o’clock when we do need the energy.”

When optimizing net zero homes, atteries change the equation, says Bilby. “At Basalt Vista we’re using the concept known as ‘delayed self-consumption.’ So the batteries are discharged at night as long as they can, and when the solar comes up the next morning, they fully charge back up. We just keep on cycling like that, and we look at the impacts that we would have had on the grid.”

Holy Cross can put the houses in three modes, Bilby explains. In “optimization mode,” the coordinator acts like an orchestra conductor, matching generation to load to try to reduce the member homeowner’s power bills. “There are algorithms that sit on each one of the controllers that send set-points to devices to try to optimize the house’s performance,” says Bilby. “The easiest thing for people to understand is that during certain times of the day or month it costs us more money to buy power.”

The second mode is “peak load management,” which enables the utility to “shave” loads during very high demand periods. Says Bilby: “I push a button in my dispatch, and it sends a signal out to the coordinator, and the coordinator then tells all the devices that the utility is calling for some power, what do you have? At this point I might un-curtail the PV all the way, to give me max kW; I might discharge the battery in sync; I might stop charging the EV charger; and I might delay any type of comfort.”

The third mode of optimizing net zero homes is called “storm watch,” during which the home is prepared for an outage. “This might just be a forecasted outage for maintenance, where we don’t want to blink the people’s lights and the homes can go into their own autonomous mode, or it might be an outage like we prepared for last year when we had a fire come through here,” Bilby says. “This mode would charge the battery, charge the EV, preheat the water—it’s almost the opposite of peak load management. We’re just trying to put as much energy as we can into things to prepare for an outage.”

The payoff for the co-op utility and its members comes when they avoid the high cost of power during the peak periods. “Our biggest costs come from energy use within a small window of time,” Bilby says. “This is called ‘coincidental peak.’ When all of us use the same electricity at the same time, one day a year when it’s hot outside and people come home and turn on their air conditioning and cook and do all their other things that use power. At some moment per month we decide to turn everything on, collectively, as a grid. And if we can modulate when that happens or flatten out our load curve so that that never happens, then we will be able to reduce costs across the whole system.”

CAD Pro allows anyone to share their ideas and plans with clients, colleagues or professional remodeling contractors using Dropbox®, Google Drive™, OneDrive®, and SharePoint®. Export files to Microsoft Word®, Excel®, and PowerPoint® with a single click.